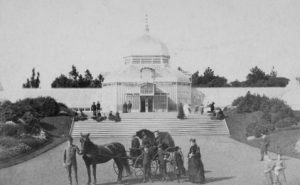 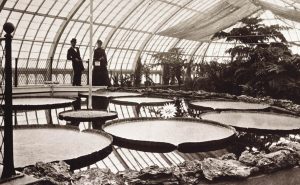 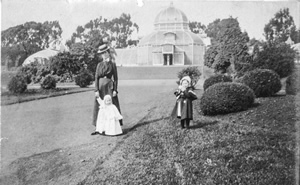 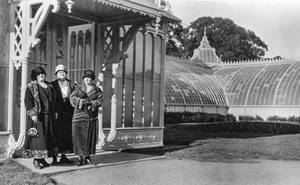 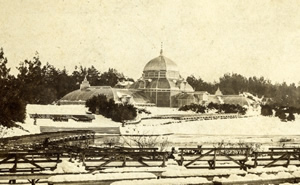 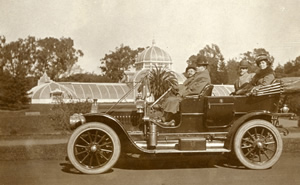 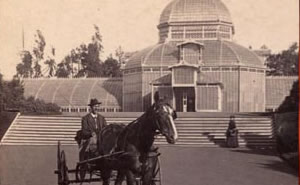 The Conservatory of Flowers has captivated guests for more than a century. This gem of Victorian architecture has a long and storied history, and is the oldest public wood-and-glass conservatory in North America. As a city, state, and national historic landmark, the Conservatory remains one of the most photographed and beloved attractions in San Francisco.

BEGINNINGS
Greenhouses and conservatories were quite fashionable in the latter half of the 19th-century, appearing on private estates and in public parks. Tropical plants were brought to California from around the world by explorers and botanists; some were even hired by collectors to stock their greenhouses.

The precise origin of the Conservatory of Flowers is shrouded in mystery, but the story begins with James Lick, a California pioneer who made his fortune in real estate. He also practiced horticulture, and in the early 1870s, ordered two conservatories for his estate in Santa Clara. Although accounts conflict, he likely commissioned the structures from Lord and Burnham – the preeminent American manufacturer of conservatories until the company shuttered in the 1980s. Most sources believe Lick’s conservatories were patterned after conservatories in London’s Kew Gardens. It is likely that Lick chartered a ship to transport the crated conservatories from Lord and Burnham’s headquarters in upstate New York to San Francisco via Cape Horn, where they were unloaded and sent to his estate in San Jose. Lick’s purpose for these conservatories was unclear. Perhaps they were to be a gift to the City of San Jose or for his own personal use; regardless, Lick didn’t live long enough to carry out his intentions.

James Lick died on October 1, 1876. After his assets were distributed to specified beneficiaries, including many charitable causes, the remainder of his estate was divided between the Academy of Sciences and the Society of California Pioneers. The latter received crates of glass equaling 33 tons: Lick’s unconstructed conservatories. In 1877, the Society of California Pioneers sold the conservatories to 27 prominent San Franciscans and local philanthropists, including former Mayor William Alvord, Charles Crocker, Leland Stanford, and Claus Spreckels. It was the intention of these men to donate the conservatories to the City of San Francisco, for public use in Golden Gate Park.

William Hammond Hall – Golden Gate Park’s surveyor and first superintendent – included a site for a conservatory on his first plan of the park in 1871. This vision was realized when the Park Commission formally accepted donation of the Lick conservatories on January 2, 1878. The Commission hired Lord and Burnham to build the Conservatory, since the crates allegedly included plans already drawn up by the company. Founding partner F.A. Lord came to San Francisco to personally oversee the project. Significant use of old-growth redwood and other native trees in the building’s infrastructure indicate that some construction materials were locally sourced. A stipulation of the donation was that the Conservatory be erected within eighteen months, and it was constructed incredibly quickly, in spite of the shipwreck of the steamer Georgia, which was carrying over $1,000 of the Conservatory’s construction materials. This may explain why the Conservatory does not seem to have a formal opening date, but rather a soft opening sometime in the middle of April 1879.

The question remains: if Lick originally owned materials for two conservatories, and only one was built in Golden Gate Park, what happened to the second structure? Several theories abound, including the possibility that it was used to construct several smaller greenhouses in the park. The true answer remains lost.

The Conservatory was an instant sensation when it opened in 1879 and quickly became the most visited location in the park. The original configuration of the interior spaces included a fountain in the entryway and another in the Palm Room, under the dome. The west wing displayed flowering and ornamental foliage in one gallery and hardwooded plants, like azaleas, in the other. The east wing featured the Orchid House and an aquatic plant gallery with a large pond, which contained the Conservatory’s first blockbuster exhibit: the Victoria regia. This giant water lily, with leaves that grow several feet in diameter, was the first of its kind to be grown in California, and brought both recognition and crowds to the Park.

Aside from its popularity with locals, the Conservatory also became a standard stop for any visitor to San Francisco, including Civil War veterans, convention attendees, Presidents, and fellow horticulturalists and gardeners. 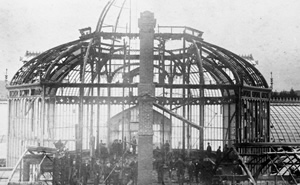 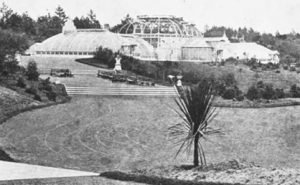 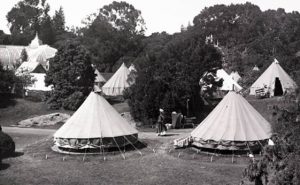 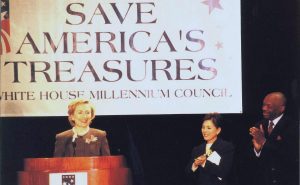 DESTRUCTION & RECONSTRUCTION
Since its opening, the building has endured several accidents and natural disasters. In 1883, a fire started in the furnace, resulting in the destruction of the central dome and many exotic plants. With no public funds available for repairs, Charles Crocker came to the rescue with a $10,000 donation. During this restoration, the dome was raised by six feet and the eagle finial on top of the dome was replaced with the planet Saturn, likely a reference to the ancient Roman god of agriculture. In 1895, the Conservatory received electricity for the first time when a motor was installed that helped to regulate temperature.

Although the 1906 Earthquake and Fire brought devastation to San Francisco, the Conservatory was relatively unharmed. The area leading up to the building, known as Conservatory Valley, became Refugee Camp No. 7, which housed homeless from the disaster in over one thousand temporary tents.

A fire originating in the furnace room damaged the Conservatory again in 1918, resulting in the partial collapse of the glass roof and damage to the Potting Room. By the 1930s, the building faced a new danger: neglect. Budget cuts, a result of the Great Depression, resulted in the reduction of park services and staff. Necessary repairs were not made, and on several occasions the Conservatory was threatened with closure.

The most devastating damage in the Conservatory’s history was caused by a wind storm in 1995. After a turbulent winter, 20 percent of the trees in Golden Gate Park were toppled, changing wind patterns and leaving the Conservatory exposed. Gusts of over 100 miles per hour in the early hours of December 12 smashed into the Conservatory, shattering 40 percent of the glass and destroying a portion of the rare plants within. With millions needed for repairs, the building was closed, with many fearing it would never open again.

Local fundraising efforts were soon underway, and the Conservatory’s plight was brought to national attention in 1996, when it was placed on the World Monuments Fund’s list of 100 Most Endangered Sites. In 1998, First Lady Hillary Clinton visited the Conservatory to induct it into the Save America’s Treasures program, a joint partnership between the National Trust for Historic Preservation and the National Park Service. Publicity from these efforts eventually led to a fundraising campaign that raised the $25 million dollars needed for rehabilitation, which included support from the Richard & Rhoda Goldman Fund, as well as significant fundraising support from the San Francisco Parks Trust, now called the San Francisco Parks Alliance and the San Francisco Garden Club. Restoration began in 2000 around many of the building’s immovable plants, and the opportunity was also seized to refresh the Conservatory’s exhibits. A grand public reopening was celebrated on September 20, 2003. 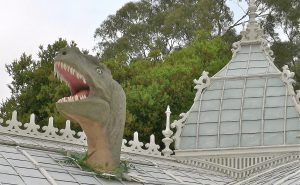 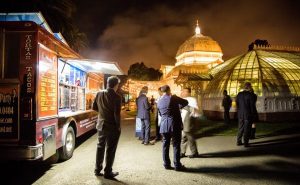 VICTORIAN MEETS MODERN
Since 2003, millions of visitors have walked through the doors of the Conservatory of Flowers, including tens of thousands of school children on free educational tours and hundreds of wedding parties utilizing the most romantic spot in San Francisco. This modern version of the Conservatory strives to connect people and plants in a way that is most meaningful for the Bay Area community and for visitors from around the world.

Travelers from the coldest places on earth stroll through the warm galleries filled with rare and unusual plants. Locals learn about current horticultural and gardening trends like aquascaping, find inspiration in the Conservatory’s living walls, and take workshops on building terrariums out of repurposed materials. The Conservatory holds talks by renowned authors, including Amy Stewart, author of Wicked Plants and From The Ground Up. Additionally, the Conservatory is a place where horticultural societies, botany students, and young plant enthusiasts gather to study collections and ensure passion for living museums and conservatories will continue to flourish.

The Conservatory of Flowers has garnered numerous local, state, and national awards, and was listed on the National Register of Historic Places in 1971.

The Conservatory relies on the donations of individual donors to support its mission.

Whether you’re a native San Franciscan, a visitor from another side of the world, or a classroom of budding botanists, the Conservatory of Flowers offers an intimate up-close experience with rare and endangered plants unlike any other. Come see what treasures await you!